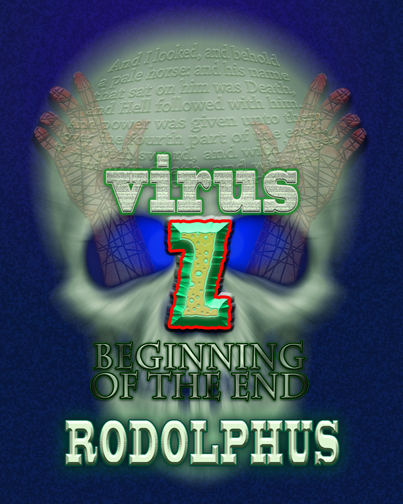 Now Available — Virus Z: Beginning of the End
a novel by Rodolphus

The key ingredient missing in most zombie novels and movies, is that personal creeping horror, when a real person struggles with the idea that "this ain't real" just might be more real than they ever imagined. Those first few moments when the heart is thumping crazily and all the adrenaline is flushing through the system, and primitive instincts are screaming RUN!

Probably the only movie that ever really touched on those primal fears was George Romero's original Night of the Living Dead, in the mid-1960s. More contemporary fare generally displays the "fight" response. People see something that they know is a very dead thing, a corpse, that suddenly comes to life, and they want to do inventive things to it, such as cut off its head with a plastic razor blade, or drop a piano on it. Of course, this is funny, and maybe somewhat thrilling, but it does not strum the very basic human chord of terror: dead things should not get up and move.

Zombieland is fun, and hilarious, but nobody confuses it with what might happen if zombies suddenly began infecting everyone in the worst way possible. The Walking Dead is original and squeamishly interesting, at times, but more often relies on the human element of camaraderie—people clinging together after the worst thing has happened, and the resourceful ways they cope (the answer, of course, as in all zombie movies and books, is guns, guns, and more guns, and that simple brain shot that takes care of biz)—utterly skipping the whole one-on-one very personal confrontation of a simple human being facing the unthinkable.

And of course, all zombie fare utterly skips a realistic cause of such an unthinkable apocalypse, generally relying on the old stand-by Government SNAFU of Government workers doing what they do best, making mistakes, and the necessary coverup.

The reason why nearly everyone reacts to the concept of zombies, and why zombies have always been prevalent in our societies for the past fifty years, is simply because we as humans are working hard, and working passionately, at bringing about something just as terrible, or possibly worse, than a zombie apocalypse. Today, right now, zombies are...hot. Because we know, we sense, way deep down, that the whole viral scenario of the dead walking is not as unrealistic as it appears in the movies—the bad movies, even the relatively good movies—we contain the knowledge of the reality.

And every day, we introduce antibiotics into their food supply, these weak, sick animals, and when they get close to death, we inject them with stronger antibiotics, we ply them with inoculations and vaccinations, and the amazing thing is, all of these chemical saviors do not disappear. They cling on, and pass on, and ultimately enter YOU, when the clean plastic has been stripped, and you toast it on your BBQ, or pull in at that helpful KFC, you become the proud recipient of every flu shot that pig received. And the Government saw that it was good.

Food. Good. Blood. We know. We know what we are doing, what we are developing inside our bodies. We soothe ourselves from this terrifying knowledge that we all carry inside us, we soothe it by holding up portable microwave ovens to our heads, and basking in the soothing microwaves that cook and toast—brain tans and happy rays—and enjoy hours of idle, imbecilic drivel.

The Zombie Apocalypse is much closer than any of us thought. Day One happened quite a long time ago, and the tipping point is approaching swiftly on a pale horse. Check out Virus Z.

The Dragon & The Wolf - Free Novella by Douglas Christian Larsen

IN PRINT: Douglas Christian Larsen
The Dark Fiction of Rodolphus